skip to main | skip to sidebar

I am putting up this post in an attempt to contact a Mr. A, who ordered the concertina which can be viewed below, on the previous post. The customer is previously from Quebec, but has moved to Japan for a few years in connection with his work. He was very specific with his order... wooden ends, mellow tone. contrasting trim on the body, "cut-away" handles, and  the same contrasting trim on the handles. This was a bit of work, more so than most other instruments. The instrument has been tuned and completed for well over a month, but in spite of numerous emails to two different email addresses, and reminders sent by Pay Pal, and a phone call I have had no response. If anyone should know this gentleman, or have other contact information, please let me or Mr. A (or myself) know so we can resolve this issue.

This happened once before with an order bound for South Korea. We tried for three months to contact her, to no avail. Finally, it was put up for sale and sold within a couple of days. Was that the end of the matter? No! A month later I was contacted by the purchaser to find out how the instrument she had ordered was coming along. She used the same email I had used in trying to contact her, but she had not responded to emails, Pay Pal, even a phone call to South Korea. I am now in the process of building another instrument for this person.

This instrument (wooden-ended) will be sold if I do not hear  from Mr. A soon.

Posted by frank edgley at 9:47 AM No comments:

The Latest
This concertina was just finished. The new owner ordered a wooden-ended concertina with contrasting trim on the body, cut-away handles capped with the same contrasting wood and bellows papers. It will soon be off to the new owner in Japan. 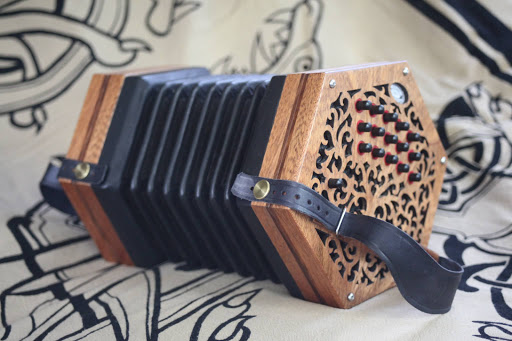 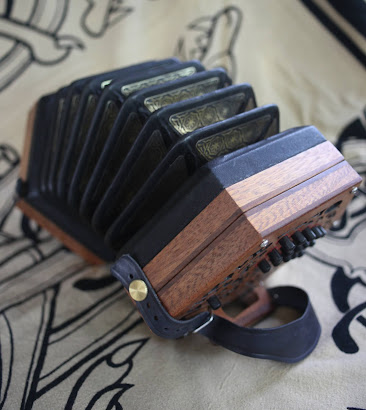 Posted by frank edgley at 1:04 PM No comments: 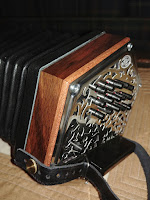 Posted by frank edgley at 2:36 PM No comments: 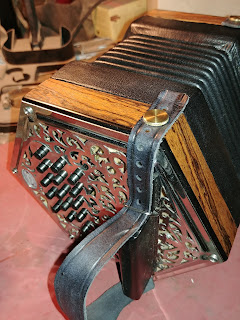 Mexican Bocote Heritage Concertina
This is the latest concertina to be completed at Edgley Concertinas. It is made from a very beautiful Mexican Bocote with an ebony trim. As with all our concertinas, we do not use thin veneers, but cut the wood from the stock wood we have in the shop. There are seven fold bellows covered in leather and with stainless grills. Wooden end grills are also available. All Heritage models have English-style reeds fitted into a traditional radial reedpan similar to those made by Wheatstone, in the early 20th Century. Our concertinas have whisper quiet action, because of our unique mechanism design and use of felt bushings and dampers. May 2020.
Posted by frank edgley at 12:43 PM No comments:

Handsome Mexican Bocote Concertina
This is one of the more recent concertinas. It is a Heritage concertina, meaning that it is made the same way English-made instruments were constructed.....English-style reeds with steel tongues and brass shoes. These reeds are individually made tapered to a 5 degree angle. Every note has its own reed, installed into the reedpan which is laid out by hand. The reed pans are made and fitted into the bellows frames. Edgley concertinas have a radial reedpan which, in my opinion, gives them a strong, but mellow tone. Hybrid concertina are differently made with the reedpan installed permanently into the body of the instrument. Our hybrid concertinas are made using special hand-made (A Mano) Italian-style reeds. There are two reed tongues to each reed frame, which make them less complicated to construct. Both types of concertinas produce a beautiful tone, but slightly different from each other. The same quality of materials and workmanship are present in both types of instruments.

Posted by frank edgley at 12:13 PM No comments: 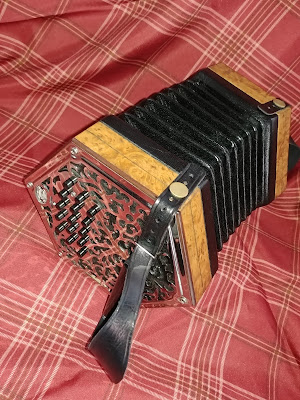 THIS INSTRUMENT HAS NOW BEEN SOLD!
Posted by frank edgley at 8:44 AM No comments:

This is a recently completed instrument. The customer requested that I make it out of spalted maple. I added  trim of padauk to add  definition. This is a really unique instrument.....probably one of a kind anywhere, made by any maker. I believe that not only should your concertina sound and play well, but that it should also look good. A few years ago, we recovered a stolen concertina which was being advertised for sale on the internet because it was unique and easily identified. 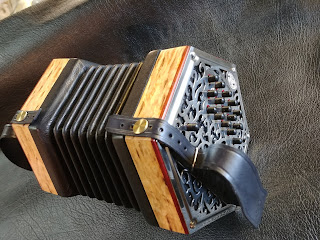 I have also used spalted maple on the concertina pictured below. This is kingwood with spalted maple trim.....on the body as well as the handles. 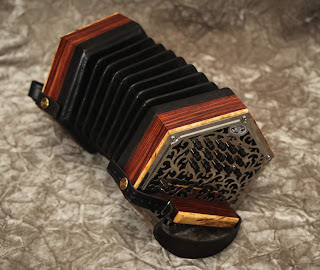 Posted by frank edgley at 7:03 AM No comments:

frank edgley
I started being serious about music in my teens after several forays into piano and clarinet. This was with the Highland bagpipe. I played for a number of years and became Pipe Major of the Scottish Society of Windsor Pipe Band. We won numerous prizes, including Canadian Championship, US Championship, Inter-provincial, North American Championship and Champion Supreme. Concertina playing began to interest me around 1978. I began to repair vintage concertinas in the 80's, and did so until retirement from teaching elementary school. I have also qualified and played in the All-Ireland senior concertina competitions three times. Harold Herrington, of Dallas, a good friend and concertina maker suggested I start making concertinas and helped me get started. As of January 2018 I have made around 500 concertinas and shipped them to customers around the world. Our mission is to produce the best instruments possible in terms of tone, playability, and appearance, which will last for generations to come.